(Last summer I had the chance to see the one and only ZZ Top at an outdoor concert about an hour away from me. The photo at the bottom of this post was taken at that performance. It was a great show, and it re-triggered synapses that originally inspired this piece I wrote for the January 1986 MSRA “Linechaser”. Rock on!)

There’s something about hotrods and rock-and-roll music. History has proven that music and hotrods just fit together. Have you ever seen the black ’29 Ford roadster that Elvis drove in his 1957 movie “Loving You”? Naturally, there’s the cast of cars and the classic soundtrack of “American Graffiti”. And then we have the “Legs” and “Sleeping Bag” music videos with this wild little ’33 Ford coupe, courtesy of that little ol’ band from Texas…. but I’m getting ahead of myself. I just think it’s a fact of rodding life that you must have music to cruise.

Just as tastes in cars are not always alike (though all the smoothed-over street rods running around may put a hole in that theory!) musical preferences differ as well. Those tastes usually show up when you’re rolling alone in your car. You can be on the way to an event somewhere or just road testing a new tune-up, but going solo you realize how nice it is to not have to worry about passengers, their ears and their musical tastes. With no one but yourself to please, pretty soon you’re digging through your collection in search of that one favorite (and we’ve all got one!) that you save just for cruises like this. In it goes and up goes the volume. In cars like mine you gotta have the stereo volume up to 5 or 6 on the Richter scale to hear anything at all at highway speed; you might even sing along. It’s heaven.

Maybe it was a solid diet of oldies for who knows how long. Maybe it was a second adolescence, or a throwback to my earlier passion for Jimi Hendrix and Steppenwolf. Or maybe it was thumbing through a rod magazine and seeing a feature on Billy Gibbons’ “Eliminator” coupe – you know, the one in the videos. Whatever the reason, my old standby oldies began to collect lint. The kicker came one day as I was in the music department (one of my favorite haunts outside the garage) and I stumbled across this self-same bright red ’33 Ford coupe’s nose blasting off an album cover right at me. You can’t say “no” to something like that. It followed me home, and I kept it. 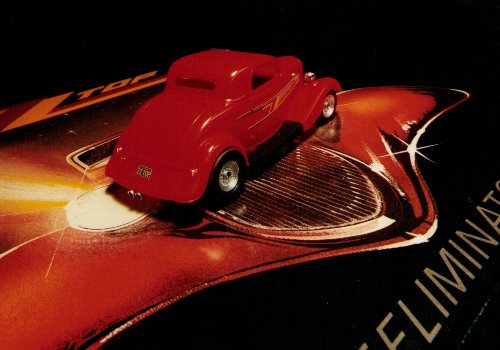 Since then, solo excursions in my street rod have changed demeanor considerably. Picture this: It’s mid-summer, and I’m leisurely motoring west on South Dakota Highway 20 enjoying the sun and scenery when the I-29 South exit creeps up to my left.  Foot off the gas, left signal on; hit the brake and I’m executing a sharp curve down onto the on-ramp. I’ve had this move planned for miles. The coupe’s engine is idling, its own momentum easing it down the gentle slope to the freeway beneath. The case with the red coupe on the cover gets opened and the volume knob takes a healthy quarter-turn. I’m barely rolling now, checking to my left and behind me for merging traffic on the interstate. There is nothing.

The pounding of drums boils into some wall-of-sound guitar licks and my right foot is down. The coupe’s exhaust pipes are singing backup to the boys from Texas: “I got to have a shot, ‘cuz what you got is oh so sweet…” I’m pulling onto the freeway now, and swinging over into the left lane I see the speedo needle is already standing at attention. I adjust the tilt wheel down a bit and slide the seat back into interstate position. Eight cylinders are firing right in time with hard-driving rhythms: “You got to whip it up…..  and hit me like a tonna lead….”  Believe me, you just can’t cruise like this to the Platters or Frank Sinatra.

Lately, I’ve been known to sit in the coupe out in the garage at night with the stereo, window panes and ZZ all trying to outdo each other. When I get frustrated at work I just imagine myself hitting the interstate with “Sharp Dressed Man” blasting at me from four directions and everything’s alright. I’ve even been seen tapping my foot on the floor in rhythm with music that wasn’t there.

Thanks, guys. The fun of music has returned. They claim rock-and-roll does this to you, but the rock and roll can’t do it alone. You gotta have the hotrods too.

Rock and roll will corrupt the younger generation, they said. They said it in the 1950’s and they’ve repeated it ever since and who knows if “they” were ever proven right. Maybe rock and roll did raise a few mutants: those free spirits who live for wind in their faces and a resonant harmony you can only get by blending exhaust notes and good rock and roll. Once you turn up the tunes and point that hot rod’s nose toward the horizon, the horizon is the only thing that can slow you down. And the beat goes on. 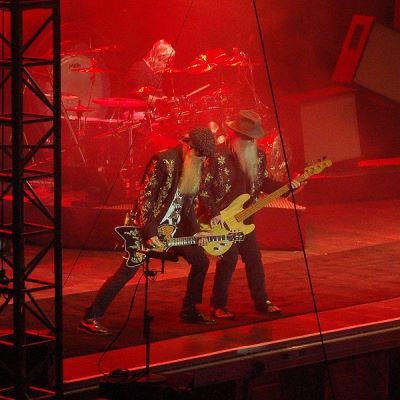