(As published in the November 2012 MSRA “Linechaser”)

Saturday, September 29: When my friend Bill and I pulled in, we figured the Rollie Rebers early Ford auction was going to be big – one of the first things we saw was a tow rig with Texas plates. There were other pickups and trailers and campers from all over the U.S., lined up in a freshly-harvested field on the outskirts of Echo, Minnesota. This was an auction that included one man’s lifetime of collected early Ford cars, parts and accessories. There wasn’t much junk here. Rollie has an upstanding reputation among area early Ford fans, and his cars proved that. Solid, mostly-original low-mileage survivors included a ’34 Ford 5-window coupe; ’32 Ford “B” sedan, ’36 Ford roadster, ’40 Ford Deluxe Coupe (whose story we will get into later), ’39 Ford Standard 2-door sedan (like the one I had, only much better..), ’41 Ford business coupe, ’51 Ford two door sedan with an astounding 67 original miles on the odometer… there were many more and I could go on but you get the idea. 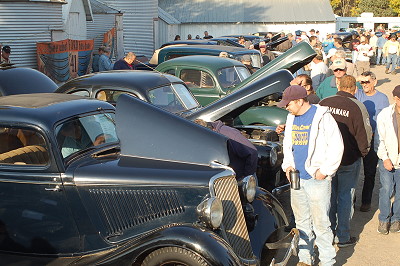 Like I said, top-shelf stuff. The goodies list was peppered with signs, dealer tools, literature, banners, posters. And the early Ford parts? Man, were there parts. Rows and rows of parts, piles of parts, pallets of parts, many of them still in their NOS Ford packaging. Maybe the coolest of the bunch was a cosmoline-coated, paper-wrapped Y-block engine block. That’s just one example.

And the one thing that I had entertained thoughts of bidding on? Took about three seconds’ worth of bidding to realize I wasn’t gonna come close on this one. It was fun while it lasted; it’s not often that I get the chance to bid against real pros. My ‘23 “T” roadster body, turtle deck and frame went to a buyer from Iowa for 5 grand. He got a nice piece.

The other bidding session that I thought briefly about engaging in had to do with a ‘40 Ford Deluxe coupe. See, I used to have a ‘39 Deluxe coupe that’s now under the excellent care of a fellow MSRA member. I’d love to buy it back but I hear the present owner is pretty attached to it. So, I thought, a ‘40 Deluxe would sure be okay. That thought lasted until the bidding took off. The ’40 sold for $21,000 to a bidder from California. But the real bad news came a little later, after the owner had loaded his new car on a trailer to head out for home. According to Yvette Vanderbrink of Vanderbrink Auctions who handled the sale, about a half-mile from the auction site the tow vehicle, trailer and newly-purchased ‘40 were involved in an accident at an intersection that totaled all three. The good news: nobody was hurt. I did see photos of the post-wreck ‘40. I’m not going to post any of them here because there are a number of photos and unofficial accident reports (and the speculation that goes with them) that have already made their way around the web. I’ll just say that my heart goes out to the buyer. For him, it was not a good day. 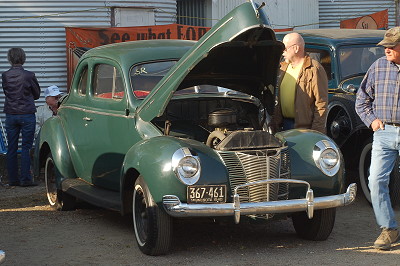 So neither Bill nor I bought anything. But it was fun bantering with buddies and watching a “well-oiled auction machine” and hundreds of serious bidders at work. And while nobody that I talked to had a glimpse into Rollie’s shop, I was told that he didn’t sell everything. He kept some stuff for himself, for future projects. Good thinking. Best of luck to you, Rollie, and thanks for giving the rest of us early Ford fanatics a day to remember.

One Reply to “Mister Rebers’ Neighborhood”