(As published in the February 2020 MSRA “Linechaser”.)

So you’ve been around this rodding game for awhile and you know who Pat Ganahl is: the former editor of Street Rodder magazine who pretty much singlehandedly revived Rod & Custom in the 1980’s; magazine contributor, photographer, book author and maybe best of all a true hands-on car builder who knows whereof he speaks.

Pat’s most recent gig was serving as a regular contributor to The Rodder’s Journal, but then I read somewhere (maybe in The Rodder’s Journal itself) that he was retiring. From a purely selfish perspective, I was a little disappointed to hear that as like many of you I’ve enjoyed his stuff for years, own several of his books, and generally place him in the upper echelon of automotive specialty writers. Pat Ganahl, retiring? Can it really be?

Turns out he was lying through his teeth.

Okay, yeah, I’m kidding around, But the good news is that somewhere amid his newly acquired freedom from schedules Pat Ganahl has found the time to do an online column. Although I guess he’s been doing this awhile, I wasn’t even aware of it until fairly recently. He’s opend up his HUGE personal photo archive. He’s posted history, thoughts, recollections, opinions, questions. We can see the foundation that the present-day rod and custom scene was built on, just a few clicks or screen-swipes away. He may follow a “when the mood strikes” kind of schedule, and as such it doesn’t pop up in my inbox too often. But when it does, I’m on it.  Thanks, Pat, for not really retiring. Here’s the link:  www.patganahl.com 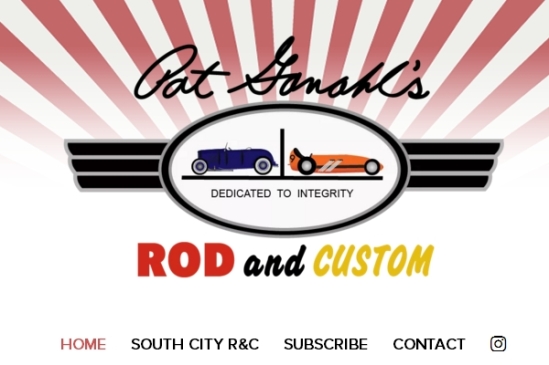